It's almost fall and I can't believe how the time has flown. I can see from this that I last posted over two. weeks ago. Shame on me! But I do have a good excuse, or rather good excuses:
They are: Had to finish my next Royal Spyness novel, called Queen of Hearts.
Had to do the copy edits on my next Molly Murphy novel called City of Darkness and Light. (Great cover, by the way. it's already up on Amazon for pre-order, coming out next March. 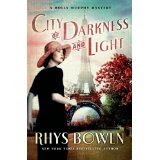 Had to look after ailing husband--he had cataract surgery and needs drops in his eyes every two hours (and makes a fuss every time)
Had to prepare for the Bouchercon world mystery conference in Albany this week. I am hosting the Jungle Red Writers panel which will be a game show called Famous First Lines. We'll try to stump the audience by writing fictitious first lines to famous books. Should be a lot of fun.
I'm also on a non-panel with two of my favorite people: Louise Penny and Deborah Crombie. We are repeating our very successful chat, non-scripted, non-moderated, just the three of us talking. It's always such fun and we never know what will come out next.

Then after the conference husband John flies in and we take off for Canada and Nova Scotia. I'm already drooling about fresh seafood and fall colors. What a terrific break.
On the way back to New York I stop off in Boston and have three events scheduled with my fellow Jungle Reds. I'm appearing at Robbins Library, Arlington MA on Sept 30th, Melrose Library in Melrose MA on October 1 and The New England Mobile Book Fair in Newton MA on Oct 2.
Do come and say hello if you live in the area!

And maybe when I get home I'll have a few moments to breath before I start on the next book!
Posted by Rhys Bowen at 10:17 AM 4 comments: