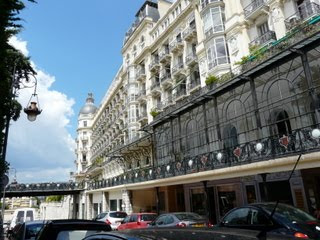 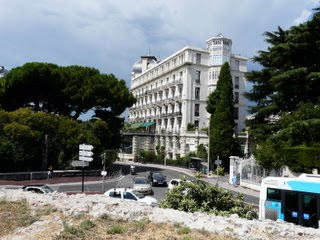 I'm in Nice and in heaven. It is glorious here: the sea is unreal shades of blue and turquoise, the sky is deep blue and the town nestles between shaggy green hills, dotted with villas. It's a perfect sized city with buses that go everywhere, making transportation easy. Those buses negotiate the most impossible winding roads with apparent ease--just rather terrifying for people like ourselves to look down at the sheer drop on one side.
I'm dying to get up to the little mountain villages but so far I've been WORKING. The reason I'm here is research for my next Lady Georgie book in which Georgie is sent on a dubious errand by Queen Mary to the French Riviera.  I've been looking at hundreds of villas, looking through archives in the libaries and generally making sure I've got my facts right. It's not always easy--for example the road I need in the book is called Princess Grace Boulevard. Obviously that wasn't true in 1930!
It's amazing how being a writer opens all kinds of doors. I presented my card at the Negresco Hotel and told them I would like to take a look at their old photos. "No problem, madame," I was told and spent an interesting hour wandering those hallowed halls, poking my nose into hidden corners of the hotel.
Yesterday I discovered where Queen Victoria stayed when she came to Nice. I'd never known she'd visited Nice before. They built a whole wing of a great hotel for her, called it the Regina. She brought a staff of 100 with her for her little jaunts--so now I have to include her somehow in the story as she is Georgie's great grandmother!
It's fascinating how one piece of research leads to another and shapes the story as I write. I wanted to include Coco Chanel and in doing research on her I discovered all kinds of fascinating facts I am using in the book (I'm not going to tell you what they are--it would spoil the story).

Anyway it's always fun to be back in France. There is a wonderful feeling for me that nothing changes here.  One gets the feeling that the French are never stressed and don't take life to seriously. Businesses are open when they feel like it--some of them not too often. A librarian recommended another library branc to me because it had a great collection of archives. "But it's closed until August 16th" she added.
Restaurants have signs outside. "Closed for our summer vacation" which is strange when you realize that the tourists come now! Everyone closes for lunch, including baker's shops. Old men still have time to sit in the square with a red wine or a coffee.

Today I'm going to take the bus on the coast road to Cap Ferrat. More impressions tomorrow.
Posted by Rhys Bowen at 10:41 PM