The Ethics of Murder 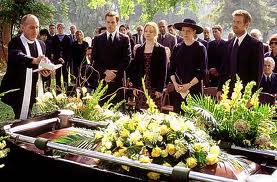 When I posted a blog about the murder on the grounds of Sandringham House, country estate of Queen Elizabeth, I commented that I wished the murder could have taken place during the reign of Edward VII so that I could have tied it in to the notorious Duke of Clarence.

Well, I got a comment that felt like a slap on the wrist. The commenter pointed out that there were grieving family members for this person and that I was being flippant about it. She was absolutely right, of course. One of the problems about being a mystery writer is that we become desensitized to murder. The corpse is a problem for us, a puzzle, a whodunit. We write a story around the body, and not about the body, and too often we forget that murder is a heinous act that tears apart so many lives.

When I think of my own more recent books I find that many of my murder victims were unpleasant people for whom we would not weep--who deserved to die, if you want to put it that way. Maybe this is my way of easing my conscience about the act of killing. When the victim has been an ordinary, likeable person I find that I do try to show how the death affects my sleuth. In the book A Royal Pain a lower class young man who works in a Communist bookshop is killed and Georgie visits his parents for more information about him, only to realize for the first time in her life what his death has done to his family.  And In Evan's Gate, which got me an Edgar nomination, the whole book is a study on what a missing child does to tear apart a family.

It was easier in the Evan books to study the ethics of killing and see things from the point of view of the victim and the villain. He was a down-to-earth local policeman and his cases often involved people he knew. M more recent Royal Spyness books are designed to be comedies. Not that I ever make light of the actual murder, but the social commentary around it is expected to elicit a chuckle or two. And so I kill off some truly obnoxious people. One does not weep when a disgusting womanizing army general from Bulgaria is killed.  In the Molly Murphy books the victim is often someone she doesn't personally know, or know well, as the murders stem from her detective business cases and from New York City life.

The problem is that we write from the point of view of the sleuth--at least I do, in the first person. And a detective can't get too emotionally involved in his or her murder cases. But I'll try to remember in future that it's not all about the puzzle, or the fast-paced plot, or the suspense of whodunit. It's about one person's death, and that it always leaves a hole in someone else's life and heart.
Posted by Rhys Bowen at 9:25 AM