I'm back home, sitting at my own computer. It's three in the morning and of course I can't sleep because in England it's already eleven. So I'm using the quiet to catch up with all those things that were waiting for me. Did I really promise to guest blog in so many places, to do so many interviews?
I had a magical weekend with old college friends, staying in a dorm at our old college. It was sad to see it in a way--the college itself is no more, victim of budget cuts within the university. I suppose it never made financial sense to have a facility for 300 female students and a faculty for them too. So the buildings are now a dorm for bigger King's College and the lovely eighteenth century old house is shut off because too much work needs to be done to it. The chapel lawn has been sold to a developer. But enough was still there to bring back memories--that's the mail box that we used to climb over the wall when we were out after curfew. 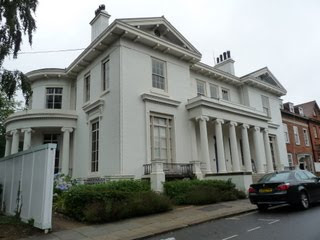 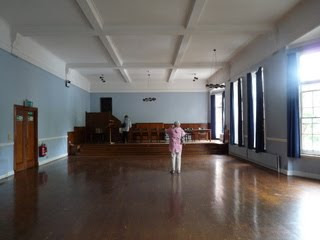 There was high table at one end of the refectory, and oh the agony of dining up there with the dons in full view of all the other students. When I was summoned it was always something hard to eat, like grapefruit in a high stemmed glass.
Of course we had a weekend of non-stop talking, laughing, eating--and quite a lot of champagne too. Most people were still so young at heart and interesting. One had raised money for a clinic for mothers and babies in Ethiopia by taking part in a sponsored bike ride across the mountains of Etheopia. She and her bike were by far the oldest but she managed the fifty miles each day. Another now runs an art center in France. Jane Finnis is a fellow mystery writer. Penny and husband are about to drive the old Monte Carlo rally route in a restored 1960 sports car. So although we're now about retirement age, nobody is playing bingo!
And the perfect ending to the weekend was a private docent tour of the Chelsea Physic Garden--a garden started in the 1600s to train apothacaries in the art of healing. There are plants to cure all kind of ills, both ancient and modern. And it is a little haven of peace in the midst of busy London.
So I come back torn in two, as it were. One part of me wanting to stay with my roots, enjoying the slow pace of the English countryside, sitting outside the pub on a warm evening, drinking Pimms, and the other part looking forward to picking up my life again, catching up with family and friends. Was is Proust who said "you can never go home again?" and I suppose that's right. Once you leave home, you never belong anywhere, one hundred percent. But one never considers that when one sets out looking for adventure as a twenty-four year old.
So it's back to writing and household chores and picking up granddaughters from school. And you know what? That part's not so bad either!
Posted by Rhys Bowen at 5:32 AM