I'll be leaving France in two days and some observations on the French have been jotted down along the way:
1.They love to make rules and then totally ignore them. There are signs saying "It is absolutely forbidden to park here," and everyone does. We watched a car calmly pull into the "bus only" bay.
Near our hotel there is a walkway that has the sign, "Forbidden to pedestrians." So we walked around for a few days before we found that everyone else cuts through there.
However--on the buses and trams there is an honor system of validating the ticket and watched everyone do it. Maybe the fine is so heavy that it's not worth cheating

Observation 2: the French are prepared to spend a lot on food, especially when eating out. I just passed a restaurant with caviar potatoes at nearly two hundred euros. And restaurans have strange names: we seen onc called the "Why Not?" another "His master's Voice."  It's usual for people to have a starter, then a main course and often dessert and coffee. And to spend hours over them.

Observation 3: one very rarely sees sloppily dressed French women. They tap around on high heels with very short shorts or skirts and sexy little tops, even when they're out shopping.

Last observation: Nice is very nice! It's easy to get around. The sky is bluer than blue. It has the sea, the hills, the villas, the hotels--lots of parks and fountains and art work--take a look at the enormous sculpture on the corner where we stay. It's called Block Head! Lots of talented street performers. A lively exciting place. 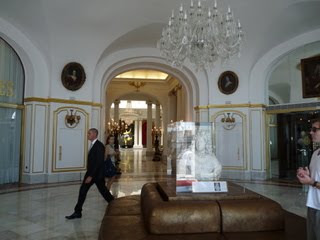 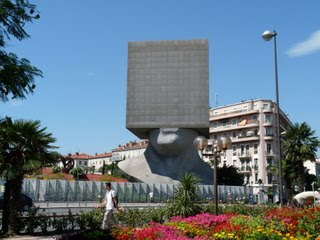 And I've done all my research--this is the Negresco hotel--rather fancy, isn't it? I've found a villa for my bad guy to live in, visited police headquarters, looked at pictures from the 30s. So the book will be full of real and interesting things. And it will have a great title....wait and see
Posted by Rhys Bowen at 9:13 AM