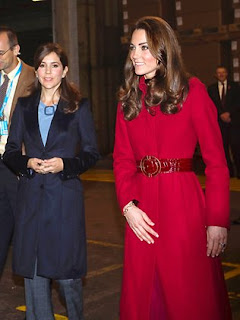 I was standing in the grocery checkout line yesterday and the headline on all the tabloids read "Kate Pregnant".In Touch Magazine actually "confirmed" the rumor, although no word has come from the Palace. This is what the magazine said: ""Since before they even got married, it's been made clear to William and Kate that having children should be their number-one priority," the magazine's source disclosed. "Queen Elizabeth II, in particular, has been dropping so many hints about wanting a great-grandchild - and an heir to the throne - that Kate feared she wouldn't be able to face her without baby news," the insider added." And to add fuel to this rumor the magazine showed pictures of Kate with her hand on her stomach, although I think this just proves she's holding her coat closed!

Obviously Brits want to know when there might be an heir to the throne (especially if it's a girl, a future queen!) but why this fascination around the world? And why this fascination with preganncy in general? If any movie star reaches iconic status the headlines will always debate whether she is pregnant, wants to become pregnant, has been pregnant etc etc.

And all those photos of stars exposing big bellies--why are we suddenly so fascinated? Pregnancy used to be a private time. It was not done even to mention it. Remember those maternity clothes that were so voluminous one could invite an army to come and camp inside them? As if they fooled anybody--we all knew there was a large belly somewhere under those folds and gussets. We just didn't want to look at it.

In a world in which many countries are witnessing zero or negative population growth, why are we then so fascinated with those about to give birth. What springs to mind is Margaret Attwod's The Handmaid's Tale! We want the population to continue--we just don't want to do it ourselves. So any pyschiatrists or pyschologists out there--why do we want to look at pregnant bellies these days?

Poor Kate. When she actually does become pregnant, she'll be photographed at every stage. She'll be observed to see what she eats and drinks, whether she's off her food or eating for two. I hope she stays in Wales, out of the public eye!
Posted by Rhys Bowen at 3:27 AM