Between Two Worlds (or is it three?)

If you wonder if writers get caught up in their fictional world I can tell you categorically that yes--we live our characters' lives. And their emotions. When Daniel Sullivan is behaving badly, I find I am snapping at my husband.

This has been brought home very strongly to me this week. I am in the middle of writing a new Molly Murphy novel. In fact I am two hundred pages into it. Molly is trying to trace a missing Irish girl and her quest has led her to a strange and creepy convent. So I am in New York, in 1904. I am with Molly and her friends, battling the garbage strewn streets of the Lower East Side, then having to take a horse and buggy between towns in Westchester County, visiting impressive mansions that might rival Downton Abbey.

And in my head I have Molly's Irish voice and her feisty character. However, my other publisher had asked me if I would write an e-story to whip up enthusiasm for my next Lady Georgie book. It is scheduled to come out in time for Halloween, in fact they wanted a Halloween story. I agreed. But then I found that they wanted it NOW. Not next fall, as I had thought. So I had to abandon Molly, about to be locked into an enclosed order of nuns, and suddenly leap to royal circles in England in the 1930s.

It reminded me of the way I felt when I was summoned to Australia when my mother was dying. It was the day before Christmas and I was preparing for the whole family to arrive. It was cold and rainy and Christmas music was playing everywhere. I got on a plane and 14 hours later I landed in Australia where it was mid-summer. All around me people were going to the beach carrying surf boards. It was so surreal I had a hard time handling it. 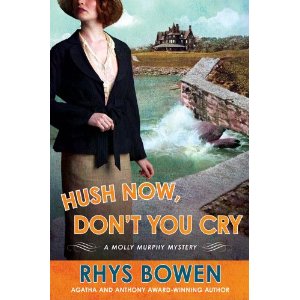 So I've been going through the same thing for the past few days. I've had to push Greenwich Village and the Lower East Side out of my mind and instead hear the well-bred tones of Lady Georgie as she goes to a reception at Buckingham Palace. I've had to make my mind come up with clever 1930s repartee and introduce Mrs. Simpson to Georgie.  I find it helps to speak the words out loud and it's funny--when I'm with Georgie I am so frightfully upper class, in my attitudes as well as my speech.

Now I've finished it and tomorrow I go back to Molly again. No more caviar and champagne for a while. No servants to dress me. Now it's back to the neat little house on Patchin Place, and Molly's friends Sid and Gus.... I wonder what will happen to her?

And next week I celebrate the release of Hush Now, Don't You Cry.
Posted by Rhys Bowen at 8:12 PM