It's a Mystery to Me! 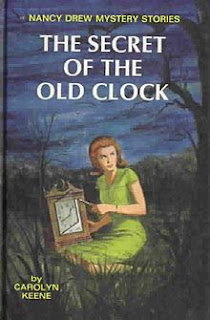 This year I am a judge for a children's mystery award and one of our discussions has been what constitutes a mystery. Many of our stories have mystserious elements, but are essentially fantasies. Think of Harry Potter--we want to know the truth of what happened to his parents, why he was the only one to survive Voldemort's killing curse and why he has to stay with the Dursleys. But it is more quest novel-classis battle of good versus evil like the Lord of the Rings.
I suppose my definition of a mystery novel has to involve a central puzzle--be it missing person, stolen jewel or other crime and a central character whose quest it is to solve this puzzle and thus put the universe to rights.
So it was interesting for me to go to my group blog, Jungle Red Writers, this morning and read the comments on how the stakes have been raised in mystery writing and whether people now expect more violence and adrenalin rush.  I felt that one way the stakes have been raised is in the involvement of the sleuth and our emotional investment in him or her. Hercule Poirot was an outside obvserver with no personal involvement in the crimes he solved other than a sense of justice. But today's sleuth is dealing with a personal battle in many cases--a tragedy in his or her own life that mirrors the crime she has to solve, personal demons, a villain with a grudge against her... I agree that this makes for a more compelling book.  I have always read mysteries for the enjoyment of the puzzle but it wasn't until I found Tony Hillerman in the 1970s that I became hooked because he made Jim Chee and the landscape around him so real and so compelling. My favorite sleuths since then are wonderfully flawed humans like Morse.


So does a mystery have to involve a dead body, a murder, a villain? It seems to be that way these days although not all of the Sherlock Holmes stories involved a murder, did they?
I suppose murder is the ultimate crime in any society which goes along with that raising the stakes idea. If we read a book with no murder, we are constantly waiting for the discovery of the body.
But for me the good mysteries involve personal relationships that lead to that murder. And they rise or fall on the character of the sleuth. Plots are fun, with twists and scary scenes--cellars at midnight with a killer on the loose. Clever methods of killing are fun. But essentially we have to care about the people or it's just like a video game.
So what do you think defines the mystery novel?
Posted by Rhys Bowen at 9:27 AM