Now I can breathe again after all the promo for Naughty in Nice, I'm going back to my Royal Gossip Mondays, sharing little snippets about the royals from recent news or things I've uncovered from royal history. 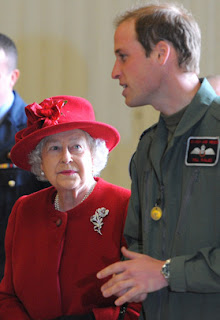 Last week the big news was that the Line of Succession is to be debated and reconsidered. Until now a son always took precedence over a daughter. Elizabeth only became queen because there was no son. Now I believe the plan is to overturn that three hundred year old statute and replace it with one that gives a female child equal right to the throne.
So if Will and Kate have a girl first, there will be another queen in our future. Makes sense, doesn't it? I think a queen has more press appeal and glamor and one has to admit that the whole royal thing is great for tourism. Also she is not as likely to have sexual flings as princes seem to be.. and thus disgrace the royal name.

This whole tradition of the heir and the spare seems strange now, but birth order and sex really made a huge difference to lives in the past. Remember Pride and Prejudice--Mr. Collins was going to get the family home because the Bennetts had no son. My husband's grandfather was a second son--the spare. Thus he was sent out to the colonies and when he returned late in life and in ill health, he lived fairly simply in a rented house (okay it was a big rented house and I'm sure there were plenty of servants) BUT his older brother got the property, the money, the title, EVERYTHING.


Today that seems so unfair, doesn't it. My brother-in-law has inherited a large family property. They have eight children and I believe a trust has been set up so that they will all inherit the property equally. How that will work, I'm not sure. Open to squabbling.
The most interesting speculation about the line of succession at the moment will be whether Charles will step aside in favor of his more popular son?
Posted by Rhys Bowen at 9:15 AM