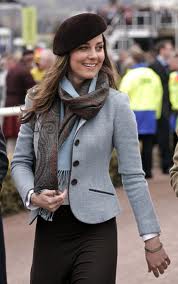 I was at the checkout counter of the local supermarket yesterday and I read the tabloid headlines while I w.

aited for a slow checker. One of them said "Kate Middleton puts on pounds in preparation for a baby."
A couple of things about this made me think... first why are tabloid headlines so obsessed with babies. In a society where childbearing has become almost a thing of the past, it seems that every popular icon has to be continually pregnant or adopting from Africa to be appealing to the masses. "Is Jen Pregnant?" "Will Angelina adopt twins from Ethopia?"  Frankly who cares, but pictures of big bellies seem to sell copies. Weird.

The other thing that I thought was strange is that she is still refered to as Kate Middleton. Actually she is now Her Royal Highness The Duchess of Cambridge. So speaking of her as a commoner by her former name is in fact a put down. You're still no better than us--that's what it's saying to me. You may have married a prince but you actually aren't royalty

I've noticed the same sort of attitude with President Obama. When Clinton or Reagan were presidents, no one ever refered to them as Bill Clinton or Ronnie Reagan. They were President Clinton. President Reagan. And yet commentators and tabloid headlines often refer to the current president as Barack Obama. Is that their subtle put down? Are they saying, as they did with Kate, "You're an ordinary person, no better than us?"  What do you think?

And as for Kate putting on pounds--she was really too thin for her wedding so that she looked great in her dress. And it's not necessarily for a baby that she's gaining weight, but rather it's lving in a cold Welsh farmhouse with bitter winds howling outside the door. One needs more fat to survive up there. Trust me, I know.
Posted by Rhys Bowen at 10:26 AM