Warning... if you haven't seen this week's episode of Downton Abbey, DO NOT READ THIS POST!
YOU HAVE BEEN WARNED.....

Are we brilliant or what? I think either I or those who commented predicted every nuance of this week's episode. The Spanish flu killing Lavinia, Jane the maid and Lord Grantham, Bates being arrested, O"Brien trying to make up for past sins. The only thing that hasn't happened yet is Richard dying of something horrible. But he has to stay around to torment Mary for a few more episodes. What do you think--they will be going in to their wedding when Matthew declares he has never stopped loving her and she rushes into his arms? Or will we have to wait for another season?
Maybe it is as some of you suggest--Richard killed Mrs. Bates and that will come to light just before Bates is to hang and Mary is to marry Richard. 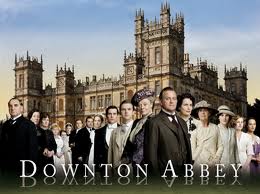 Although I am absolutely hooked--I came into our condo in Arizona after driving for 12 hours from San Francisco and the first thing I did was to turn on the TV to catch Downton,  I have to say one thing that bugs me--well, several things bug me, but the one I'm complaining about tonight is the long meaningful stares. Those long periods of silence when people look at each other, in close up, or give thoughtful stares into the distance. It's almost become a cliche.

What I liked about this week was the theme that one doesn't have to be noble to act with nobility. The Irish chauffeur who is marrying Sibyl, the maid Jane and the young woman who refuses to give up her baby behaved better than Lord Grantham.

So let's hear what you thought--and speculations for next week. Thomas after the butler's job?
Posted by Rhys Bowen at 9:31 PM