Why do we love vampires? 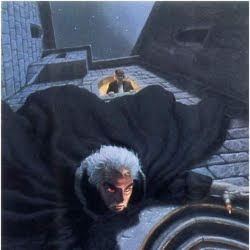 Following on nicely with my superstitions thread, I suddenly realized that my next book is all about superstition--and our deepest folk fears, of evil that walks in the dark. In the past when only a candle lit a few feet of darkness it was easy to understand that the wind moaning down the chimney sounded like a soul in torment, or that a flapping sound was an undead creature flying through the night to seek blood.

My next book, ROYAL BLOOD, has all these elements in it, but I hasten to add that it is not a horror story. It is comedy, like the rest of the Royal Spyness books. Lady Georgie, my royal heroine--34th in line to the throne but penniless as ever, is asked to represent the family at a royal wedding in Europe. She discovers that the wedding is at a castle in Transylvania--and yes, something is crawling up the walls and a pale young man is bending over her bed.

I decided that there was such a universal fascination with vampires that I wanted to have fun with the whole Dracula motif.  I'm not saying whether there are real vampires in my book or not. You'll have to read it to see. But I am interested in what lures us to stories of the undead. The desire to be scared but safe. That same feeling as we sat around a campfire as children and told ghost stories. But it's more than that--it's the ultimare lure of forbidden fruit. The sexy vampire toying with our very soul, but irresistable.

That's why it's so delicious to write about--if, like me, you don't take it too seriously. I know there are some people who do. Charlaine Harris says that people with sharpened teeth show up on her doorstep. She's had to put in a perimeter security fence. They hire security when she speaks. So I seriously hope these folks are not offended when I poke gentle fun at them in my book.... I don't want them showing up on my doorstep, fangs and all.

So why do you think we are attracted to vampires?
ROYAL BLOOD comes out in September! Watch out for it.
Posted by Rhys Bowen at 10:06 AM