I was in the spa at my health club yesterday when I overheard the following conversation:
"You can use all kinds of weapons--sword, hatchet, whatever and I just grabbed the guy and ripped his arm off."
"Dude!"
"It's like Gears of War 3 only more violent. Blood everywhere."
"Dude!"
And in the middle guess who shows up? Chaos!"
"No way!"
"Way!"
"Dude!" 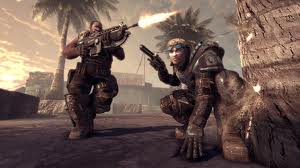 Several things were interesting about this exchange. The first was that these were not kids. They were men, at least in their twenties. It took me a couple of sentences to realize that they were talking about a video game, and then my next reaction was that this was more real to them than real life.

We talk about growing violence in our society, about young men seeing life as cheap and yet we have men like this who are living vicariously by killing other creatures on screen. No wonder it's easy to pull a trigger in real life when someone pisses us off.

Another woman was sitting in the hot tub and she and I exchanged amused glances. As she left she murmured to me. "Three words. Get a life."

As I left I found myself thinking 'thank heavens I write historical novels.' First my characters express themselves in complete sentences. They have large vocabularies. They are careful not to mention distasteful subjects and in the case of my Royal Spyness novels all the young men would have fought in World War 1. They would have experienced the real horrors of war and would never want to play a violent video game--trust me.